As technology becomes our daily companion, as more and more physical elements merge with the virtual world, and virtual elements increasingly pervade the physical world, how does this change our relationship to music?

Making Music with Smartphone Instruments on the iPhone, iPod touch and iPad.

Musicians demand high standards of their instruments regarding their functionality, handling and dependability. Everything must be created in the moment, must be expressive and intimate at the same time. The new digital technology does not merely provide a potential new medium and music workshop. Instead it aims to create virtual spheres of experience, which allow users to believe they are part of this world instead of remaining outside onlookers. This can be accomplished successfully whenever the genuine qualities of the innovative technology are utilized in such a way that new forms of musical interaction and aesthetic expression emerge. 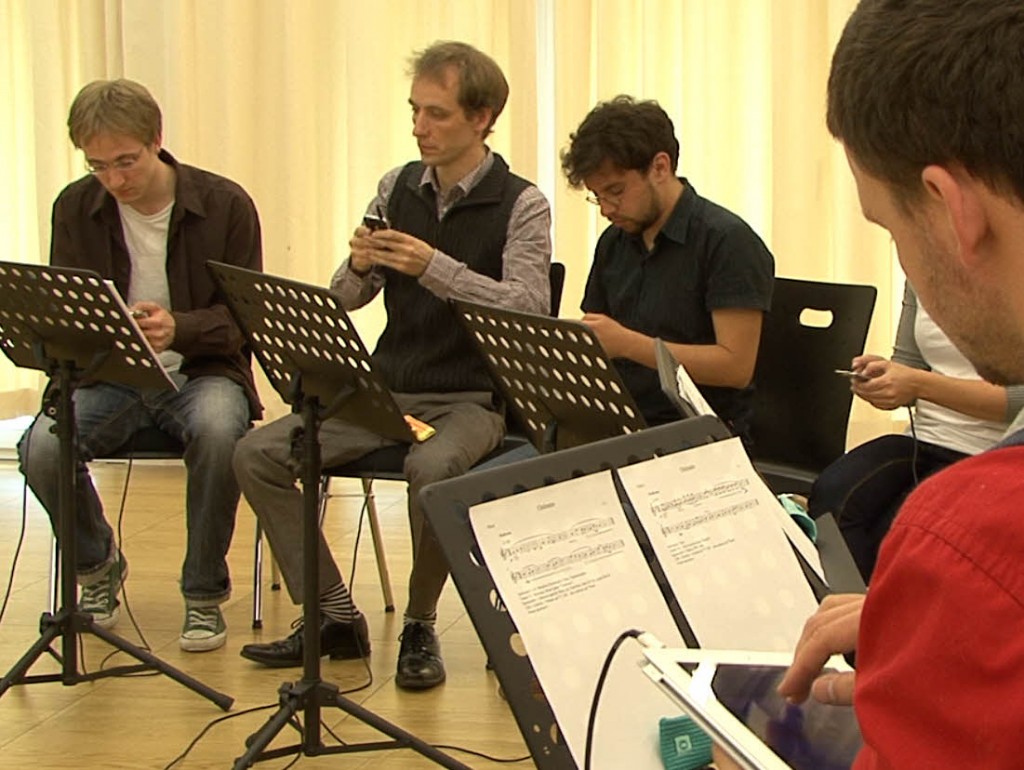 Musicians of the DigiEnsemble Berlin in a rehearsal. 2011 July by Lukasz Fabijanczyk

Next to developers and hackers, it was mainly artists who explored the specific qualities of computers and networks. Smartphones and Tablet PCs – with the iPhone and the iPad leading the way (1) – have appeared as a new class of devices, opening up a new world of possibilities. In this case, these mobile devices are small-size portable computers. Mobile applications (so-called apps) such as rhythm machines, synthesizers and effect devices can be installed. However, these universal devices can’t meet expectations when compared to a modern music PC; meagre computing power, limited interfaces and an audio hardware that is heavily based on a consumer clientele are the nightmare of any half-way decent, technologically inclined musician.

On the other hand, portable devices with touchscreen technology open up a whole new range of possibilities for making music. A variety of examples show, that this still young medium is a true treasure trove of innovative musical instruments and an experimental music lab. Interaction and control are the key challenges for further development. Is it sufficient to imitate on Tablet PCs the way traditional instruments are played? How can technical barriers be eliminated for intuitive music making with mobile devices, regardless of whether it’s in one location or on the Internet? At the same time musicians are looking for long-term solutions. They are on a mission to create a close relationship to their instruments and their pieces. This process requires enormous endurance in order to obtain artistic qualities as well as the desired expertise.

For musicians facing the new challenges it is exciting to follow the development and help shape it. It is astonishing how some respond to these trends enthusiastically while others are sceptical about them. A plausible reason is the fact, that even technologically inclined people find it hard to keep track of the spectrum of technological innovations and feel overwhelmed by the rapid development. Others argue that the artistic expression is predetermined by the prefabricated applications. A purely passive view is contrary to the creative attitude though: making music is always an active innovation process. (2) In the beginning you have to rearrange some things and rethink familiar steps to even begin to use certain advantages. At the same time the music is changed by this new manner of utilization and something new is created. Habit is the enemy of innovation and is equal to stagnation.

In the following section, the musical possibilities and properties of music apps on current mobile devices will be introduced in order to demonstrate their musical potential. These are divided into three different areas of music apps.

Digital-only music production is the standard today. Studio PCs or private laptops offer musicians a wide range of tools to produce high-quality results autonomously – independent of expensive equipment. What is still missing is a convenient way make your studio project portable. Some musicians have now substituted their Studio PC with the iPad for certain tasks. A guitar riff on ‚iShred‘, an expressive melody with ‚Organ+‘ or a rhythm pattern on ‚NanoStudio‘ – each is an example of this music practice. The Smartphone can be used as a musical “note pad“ in order to try out and save spontaneous ideas in a simple way – whether you are on a bus, a train or at home. Already there are some albums solely produced on iPhones and iPads.(3)

The interfaces on the devices may be limited. Nevertheless, a broad range of data-exchange tools for music apps has quickly developed. Some applications allow for entire music projects to be transferred back and forth between smartphones and computers. Professional music productions in a studio can greatly benefit from controller applications such as ‘TouchOSC’, which converts iPods and iPads into freely programmable universal remote controls for MIDI devices or studio software.

Most professional computer programs are very complex in their handling. They are too expensive just to try out and too ambitious for occasional users. As is the case with conventional musical instruments you need patience and experience to produce satisfactory results. With the appearance of touchscreens, stumbling blocks due to complex handling have been eliminated and modern mobile phones are operated via an intuitive surface.

The simple kept app “Rockmate“ emerges as musical group fun. Up to four people can play together simultaneously on only one iPad. For this purpose guitars, drums, keyboards as well as different tools are provided. The recorded song can be sent via mail.

Simple music games, so-called Sound Toys, play a key role in the development of music apps. They are best described as atmospherically mystified and playfully revealed, virtual sound spaces. ‚Magic Piano‘ is a popular example, which provides a whimsical round keyboard and a glittering assistant for playing songs. In addition, the application allows you to play duets with another random online game partner anywhere in the world. Other interesting Sound Toys include ‘SingingFingers’, ‘Bebot’, ‘BeatWave’ and ‘iAmBeatBox’. They all share a playful approach while offering expressive composition possibilities. Since special musical abilities are not required, a broad user community can “let loose” in an exploratory way. Therefore, Sound Toys are a suitable starting point for an expandable journey into the world of making music.

Musical instruments are normally characterized by a precise controllability of a specific, fine tuneable spectrum of acoustic colours. They enable musicians to musically express themselves by combining different tone colours and forming sound progressions. App instruments extend the structural flexibility of software instruments by combining the advantages of sound production, which – in principle – can be created freely, with a variable game surface. Graphic concepts, which do not merely mirror traditional instruments but instead offer a music concept that is logically adapted for mobile devices, have proven to be especially useful in making music. This way, pitches and effect modulations can be played as scalable bars or spread across the whole display area. Additionally, there is a number of sensors which, for instance, respond to tilting, turning or shaking the device and then generate modulations such as volume, vibrato or glissando.

In order to make full use of music apps like ‘SoundPrism Pro’, ‘Tenori-On’ and ‘SynthX’ the players have to make an effort to become familiar with these instruments. To play music together within a band or orchestra, app instruments also require intensive rehearsals.

THE SMARTPHONE ORCHESTRA AT THE BERLIN UNIVERSITY OF THE ARTS

Every day new apps with further developed functions and new instrumental possibilities enter the market. As the music arena for Smartphones is growing and some technical challenges remain unsolved, the question arises which principles ultimately make conceptual or aesthetical sense and work effectively in terms of musical performance. The artistic experiment may offer insights. For this purpose a smartphone orchestra named ‘DigiEnsemble Berlin’ was founded at the Berlin University of the Arts, where musicians with different musical backgrounds play together. They test how smartphones and Tablet PCs can be used for making music together and experiment with different music genres. They restrict themselves solely to those apps that are available for everyone on the app store.

If you are interested you can find notes, playing instructions and a video that demonstrates what making music on smartphones may look like, under www.digiensemble.de/ostinato. It is intended to encourage the creative usage of music apps and to gain new musical experience.

Initial concerts have shown that musical experiments with apps are a worthwhile experience. For popular music styles a few decent synthesizer, percussion and guitar apps as well as expressive step sequencers, which easily allow you to play stage interludes, are available.(4) The most astonishing results are found in classical music. The original composition ‘Ostinato for 8 iPods’ is an attempt especially conceptualized for the ‘ThumbJam’ app. Naturally the piece can also be played with other apps or traditional instruments.

The next task in the ‘app music’ experiment will be to explore specific characteristics in greater detail and to go beyond playing conventional music. Interesting aspects here, are networking over the Internet, synchronization of several devices and apps, or high functional flexibility.

App music does not reinvent music as an art form. Rather, it adapts actions and aesthetics from various musical styles and searches for new ways to make music. We are still at the very beginning! All forms of app music share the main principle element of exploring and making music. Touchscreen control enables users to intuitively and directly influence the concretization of music. App music concisely confirms the view that an essential and often underestimated value of any form of music lies in its social function.

Or is it not more than a pseudo musical practice made suitable for the masses? Obviously gadgets like the iPhone and the iPad are being overly hyped for the mass market. On the other hand, making music is no longer confined to professional musicians only. Nowadays hardly anyone leaves the house without a mobile phone. In addition, the increased introduction of spontaneous, creative self-expression into the data stream of modern communication means reflects a certain need within general media usage. This development will certainly not be reversed. Never again will there be a time without mobile devices, which today we like to call „smartphones“.

It is yet a vision to invent musical means of expression, which are exclusively defined by the user’s creativity rather than by the operation of the device. But why talk about hardware when it is exactly its disappearance that makes the digital world magical? If you think this development through to the end, the creative and collaborative use of sound and music and sharing the musical results will eventually be the main element in future musical practices.

(1) There are music apps for Android smartphones and other portable devices like Nintendo DS as well. However, up until now their number has been much smaller and their performance is poorer. For this reason, the following explanations mainly refer to examples from the iPhone, iPod touch and iPad.

(2) This can be seen in the interpretive handling of the musical text, which is subject to constant orientation and adaptation, too.

(3) On December 25, 2010 one of the first albums produced on the iPad was published by the popular cartoon band ‘Gorillaz’ under the title ‘The Fall’.